Listen to “Take Me To The King”–Tamela Mann

Elisha Helps a Shunem Woman Get Her Land Back 2Kings 8:1-6

8 Elisha had told the woman whose son he had brought back to life, “Go away with your family. Stay wherever you can. The Lord has decided to send a famine on this country, and it will last seven years.”

4 The king was talking to Gehazi, the servant of the man of God. He said, “Please tell me about all the great things Elisha has done.” 5 While Gehazi was telling the king how Elisha brought a dead child back to life, the mother came to make an appeal to the king about her house and land.

Gehazi said, “Your Majesty, this is the woman, and this is her son whom Elisha brought back to life.”

6 When the king asked the woman about this, she told him the story. So the king assigned to her an attendant to whom he said, “Restore all that is hers, including whatever her property produced from the day she left the country until now.”

Mother Dorothy Branson, the epitome of beauty, grace and strength.  I can’t begin to imagine what it is to walk in her shoes, especially during this time in her life.  This is a woman who has been by her husband’s side for six decades!  She was there at the very conception of the ministry and building of  Mt. Olive.  I can’t imagine the nights she prayed and the days she toiled and labored beside her husband.  I know it was no easy task to wear the many hats of womanhood, wife, motherhood in the natural and motherhood in the church.

When I read about the Proverbs 31 woman, I can easily see her name written there.  I personally remember standing behind her chair as she sat beside the bed of her husband as he was taken off the ventilator.  She sat there with her hand raised toward him praying.  The harder she prayed, the faster his heart would beat until he finally took his last breath.  That will forever have an impact on me as it showed me the power of love between a husband and wife and showed me the true meaning of “till death do us part”.

I also remember the strength and grace she displayed at his homegoing especially when Bishop Wells told her he would allow her to choose the person to succeed her husband and asked her to speak on the subject.  Filled with grief, she managed to stand and begin to talk about the wonderful attributes of Pastor Branson and you immediately knew that those were huge shoes to fill especially when she talked of how holy he was.

The next 12 months would prove to be one disappointment after another when the promises of allowing her to choose her husband’s successor turned into empty promises.  The very leaders she put her trust in to do right by her and her husband’s wishes never called to check on her, nor sent their regards.  It went from being mindful of her and allowing her to choose, to cramming a pastor down the throats of her and people of God that had no regard for her or them.  I can’t imagine what it felt like the day she only wanted to go into the sanctuary that she spent many days and nights on her knees praying over the past six decades and finding the sanctuary doors locked and being told that she couldn’t come in.  Not to mention, she had no access to her beloved husband’s office anymore?

I can’t even imagine what it felt like to be treated like a second class citizen and cast aside on my own property.  To me, it would have to feel like arriving to my home and finding that someone else had moved in and moved me out.  Not to mention, the Sunday morning on Sept. 2nd, when she arrived arrayed in her beautiful silver suit with matching hat and told by the police that she and her family were now trespressing on the very property that they all labored and sacrificed so much to attain and maintain.  I am weeping now as I write because no one deserves to be put through this turmoil!  This is an 83-year-old widow who’s only dream is to see her husband’s vision and legacy live on.  It’s way more than land and buildings, it’s simply the will of God for her life.

When going through the property dispute, God’s hand was upon her.  At one of the hearings, she sat with her hands raised and silently prayed for everyone in that court room.   I know He heard her cry for sure when the ruling of Judge Vorhees came down on August 24th in her favor!  What I don’t understand is how her ruling could be twisted to where one man could convince an enitre police department and group of people that her ruling said different!   Now, once again, just like the widow in 2 Kings 8:1-6, Mother Branson has come “home” to find that her properties have been “taken”.

That Sunday morning, one would think that she would go away with her head down, but that is not the case.  As I watched her walk down the sidewalk minutes later and reach out to one of her granddaughters that was very hurt by the situation and take her in her arms and began to pray for her and stood there in the rain praying and petitioning the “King of Kings” with her request, I once again cannot explain the admiration I felt for this true pioneer and woman of God.

One thing’s for sure, God honors His Word.  It is to one’s best interest to take His word to heart.  “”Never take advantage of any widow or orphan.”  (Exodus 22:22) (Job 24) “While all the people were listening, Jesus said to his disciples, “Beware of the teachers of the law. They like to walk around in flowing robes and love to be greeted in the marketplaces and have the most important seats in the synagogues and the places of honor at banquets. They devour widows’ houses and for a show make lengthy prayers. Such men will be punished most severely.” (Luke 20:45)

It was never about what they could get and heap to themselves, but it was always about doing the will of the Lord and giving of themselves so that all whom they encountered would leave their presence blessed.  I know without a shadow of a doubt that the labor of Pastor and Mother Branson, will not be in vain and God will see to it and honor their lives and sacrifice.

The lesson I have learned the most from watching the lives of both Pastor and Mother Branson, is that, when faced with opposition in life, it is not the time to give up, tuck tail and run, but to simply say, “Take me to the King!”

“Many daughters have done virtuously, but thou excellest them all.Favour is deceitful, and beauty is vain: but a woman that feareth the Lord, she shall be praised.  Give her of the fruit of her hands; and let her own works praise her in the gates.”  {Proverbs 31:29-31}

The Parable of the Persistent Widow

1Then Jesus told his disciples a parable to show them that they should always pray and not give up. 2He said: “In a certain town there was a judge who neither feared God nor cared about men. 3And there was a widow in that town who kept coming to him with the plea, ‘Grant me justice against my adversary.’

4“For some time he refused. But finally he said to himself, ‘Even though I don’t fear God or care about men, 5yet because this widow keeps bothering me, I will see that she gets justice, so that she won’t eventually wear me out with her coming!’”

6And the Lord said, “Listen to what the unjust judge says. 7And will not God bring about justice for his chosen ones, who cry out to him day and night? Will he keep putting them off? 8I tell you, he will see that they get justice, and quickly. However, when the Son of Man comes, will he find faith on the earth?”  Luke 18:1-6 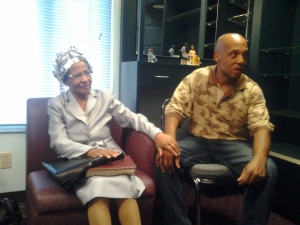